Platybasia (PTB) is known as the skull bone anomaly consisting of the flattening of the base of the skull. It results in the opening of the basal angle of Boogard. The normal value of this angle ranges between 115º and 140º. When this angle is more than 140º, this condition is known as Platybasia. Other reference angles can also be considered to determine the presence of Platybasia, for example Bull’s (normal value 13º).

– According to the conventional theory:

The cause of Platybasia is conventionally unknown.

– According to Filum System® Medical method:

According Dr. Royo-Salvador’s theory, Platybasia is caused due to a congenital mechanism of growth asynchrony between the Spinal Cord and the Spine during the embryonic phase. Due to this reason – the encephalic mass suffers an anomalous cord traction force from the sacrum, whose origin lies in Filum Terminale. This force can determine an alteration in the vertex of the basal angle of the brain: when this angles opens, Platybasia appears./p>

Dr. Royo-Salvador (1992), in his doctoral thesis showed that several diseases of unknown cause, such as: Arnold-Chiari I syndrome, Idiopathic Syringomyelia and Idiopathic Scoliosis, Platybasia, Basilar impression, odontoid retroflexion, Kinking of the Brainstem, share their cause and are caused by the traction force on the spinal cord and the entire nervous system. Namely a new concept of disease, the Filum Disease.

The traction force on the entire nervous system in the Filum Disease is present in all human embryos, so it affects everybody to a higher or lower extent and if this traction exceeds the normal limits the disease manifests itself in many different ways and intensities.

For the diagnosis, treatment and follow-up of the Filum Disease, a medical method called Filum System® has been developed.

For the diagnosis and follow-up of Platybasia, the skull is examined with a computed tomography cranial-CT scan.

Some diagnosis may also be made through a Nuclear Magnetic Resonance – brain or cranial MRI – but, once detected, for the optimal study of the malformation, the CT is indicated. 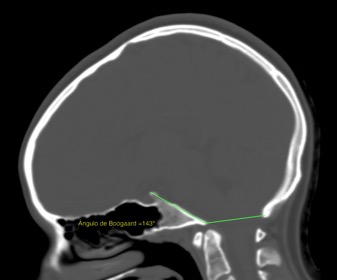 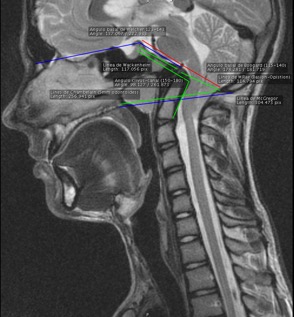 Fig.2 Platybasia seen through a MRI.

Platybasia is a congenital malformation.

If Platybasia appears alone, no complications are observed. But, when it is associated with Basilar Invagination, it can result in some complications.

Conventionally, no medical or neurosurgical treatments are indicated for the diagnosis of Platybasia.

On the other hand, if the Platybasia is accompanied by other malformations of the cranial-cervical junction, nowadays, one has to go through very complex, invasive neurosurgical interventions depending on the nature of the malformation. It entails a high risk of morbidity and mortality due to its complications (in addition to the risk of the accompanying conditions).

For example, if Platybasia is present with the Arnold-Chiari I Syndrome; normally Craniectomy and Suboccipital Decompression surgery is performed. However, if it is associated with Basilar Invagination; the resection of the odontoid can be applied with cranio-cervical instrumentation.
Since 1993, with the publication of the doctoral thesis of Dr. Royo-Salvador, relating the caudal traction of the entire nervous system by the Filum terminale, as a cause of the Platybasia – among other diseases – a new etiological treatment has been designed, given that surgically sectioning the Filum Terminale the responsible caudal medullary traction force is eliminated.

If the Platybasia is not isolated and is accompanied by Basilar Invagination or Arnold-Chiari I Syndrome or other diseases (which share the cause of anomalous caudal traction), the Sectioning of the Filum terminale is recommended according to the technique designed by and exlusive to the Institut Chiari de Barcelona, included in the Filum System® method.

The Sectioning of the Filum Terminale

11. Eliminates the cause of Platybasia.

2. With the ICSEB’s minimally invasive surgical technique, the surgical time is only 45 minutes. Few hours of hospitalization are required. Local anaesthesia is used. The postoperative period is short and without limitations. No stay in the Intensive Care Unit. No blood transfusions is needed.

3. Its application implies 0% mortality, without sequelae.

4. It improves the symptoms and stops the evolution in the pathologies associated with Platybasia.

With the Sectioning of the Filum Terminale, the tension on the spinal cord is eliminated and the force that generates the curvatures generating, originating from the tense Filum Terminale, disappears. The simple sectioning of this ligament takes away the force the spinal cord is subjected to and the latter ceases to send bending stimuli to the spine, stopping the traction process.