In general, cerebrovascular disease is a definition used to describe a heterogeneous group of pathological conditions that share a focal dysfunction in the brain tissue, due to an imbalance between the supply and requirements of oxygen and other substrates. It defines the process in a general way, be it acute or chronic, ischemic or haemorrhagic.

In 1987, Hachinski introduced the concept of leukoaraiosis (from the Greek leuko = white, and araios = rarefaction) to refer to an alteration in the white matter and in the brain hemispheres, visible in Computerized Tomography and Magnetic Resonance images. The lesions can be punctiform or more extensive, focal or diffuse. With this term, he did not suggest any clinical or pathological correlation, but simply named relatively frequent abnormal images. It is, therefore, a descriptive neuroimaging term that can be associated with various clinical and pathological situations, and heterogeneous since it includes various types of morphological alterations.

The white matter receives its blood supply through a complex cerebral microvascular system, formed by small penetrating arterioles that arise from the main cerebral arteries at right angles. These are very long terminal arteries with small diameter. Due to this, the white matter around the ventricles (periventricular) becomes a border zone vascularization, especially susceptible to ischemic injury. The affectation of these arterioles, resulting in a narrowed and reduced artery lumen, would produce a decrease in blood supply which, when chronic, would be responsible for the presence of leukoaraiosis.

The progression of leukoaraiosis tends to follow a general pattern. Initially, periventricular lesions towards the limit (caps) of the lateral ventricles (Fig. 1) are observed spreading around them, in relation to the severity of the phenomenon, (Fig. 2). 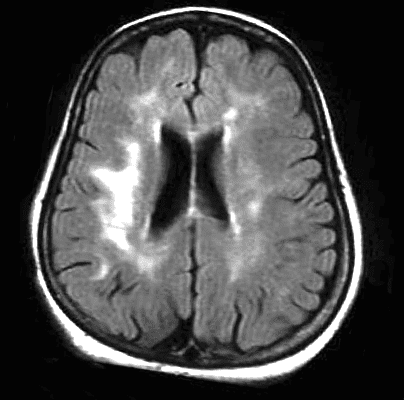 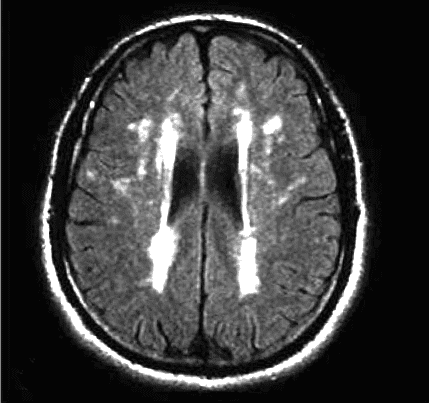 Being a descriptive concept, Leukoaraiosis does not entail symptoms in itself, but its different degrees of neuroimaging are associated with different correlative symptom pictures.

In general, the symptoms associated to some extent with any of its degrees can be: ischemic stroke, cognitive disorders, claudication of gait, mood and sphincter alterations.

The degrees of Leukoaraiosis range from 0 to III:

– degrees 0 and I are mild and without a recognized correspondence with specific symptoms.

– degree II and – far more – degree III are severe, they determine the leukoaraiosis that most affects the white matter of the brain tissue and damages both cerebral hemispheres with scattered lesions in wide areas of the brain. It is a disease that becomes progressive. It is especially detected in people with some mental disorder, and in those with diseases associated with neurological damages or symptoms of dementia.

As we have mentioned, Leukoaraiosis refers to alterations that can be detected through Computerized Axial Tomography (CAT) and brain Magnetic Nuclear Resonance (MRI) images which consist of areas of hypodensity or hyperintensity, respectively.

Of these two, the most widely used technique for the assessment of Leukoaraiosis is the brain Nuclear Magnetic Resonance imaging including T2-weighted and FLAIR sequences.

The Fazekas qualitative scale (Fig. 3) is the most widely used system to determine the magnitude of white matter lesions in MRI and it ranges as follows: 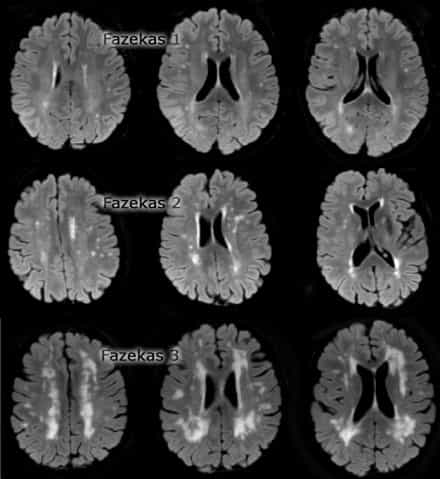 -According to the Filum System®:

At our centre we frequently detect the presence of images of Leukoaraiosis in the white matter on MR T2-weighted axial sequences, especially of degree 1 and seldom of degree 2, in patients diagnosed of Filum Disease or Neuro-Cranio-vertebral group of conditions – in at least the 45% of our database and in all age groups.

Currently, the pathogenesis of leukoaraiosis is controversial.

Some authors recall that it is not yet clear whether the mechanisms that produce the ischemic punctiform foci are the same as those that cause a widespread diffuse leukoaraiosis. Furthermore, it is unknown whether associated pathological changes are the cause or the consequence of white matter lesions.

The two main hypotheses concern: abnormalities in the self-regulation of blood flow or the blood-brain barrier failure.

Currently the most recognized mechanism of production of leukoaraiosis is chronic ischemia, due to a damage in penetrating arteries.

Hypertension and other conditions that affect the blood flow and oxygen supply to the brain seem to be closely related to severe Leukoaraiosis.

After observing in neuroimaging the association of leukoaraiosis and punctiform ischemic foci, in patients with Filum Disease and Neuro-Cranio-vertebral Syndrome, at our centre we consider another hypothesis of pathogenesis: leukoaraiosis could also be related to the traction of the spinal cord, exerted by an overly tense Filum Terminale, and to the ischemia that it can produce in the tissues of the entire nervous system, by causing the collapse of the blood vessels of smaller diameter.

In general, on one hand the recognized risk factors for the cerebrovascular disease concern family, individual and lifestyle characteristics.

On the other hand, the main recognized risk factors for the presence of Leukoaraiosis are age and hypertension, although it is also associated with others, such as Diabetes Mellitus, heart disease or arterial stenosis. These would be associated with alterations in cerebral microcirculation, leading to a vascular demyelination that could be considered as the origin of the ischemic foci.

Leukoaraiosis is also related to aging and clinical pictures of senile dementia, although it has been detected in relatively young people, 40 years old, but whose drug use – such as heroin, tobacco, and constant exposure to pollutants – make them prone to presenting Leukoaraiosis in any of its degrees. Also, arteriosclerosis is another factor observed in its appearance.

In patients with images of Leukoaraiosis in the white matter and associated with the Filum Disease and Neuro-Cranio-Vertebral syndrome, we can observe that a shared risk factor is family history:

The caudal traction produced by an overly tense Filum Terminale – that we define as Filum Disease – can cause an impairment of blood flow in the spinal cord, and in the entire nervous system. This is a congenital disease that can be transmitted to offspring.

The severity of Leukoaraiosis is increasingly associated with cognitive deterioration or behavioural changes in patients. The clinical manifestations in relation to associated cognitive functions range from a mild damage to the onset of dementia, and primarily affect the cognitive processing speed and executive functions.

Generally, adequate treatments that are effective in stopping the progression of leukoaraiosis are different from those recommended for the diseases with which it is associated.

The most indicated treatment to slow the progressive deterioration caused by the Leukoaraiosis, once it is detected, is to maintain a balanced diet that includes food rich in folic acid, folates and B vitamins and avoid toxic substances and unhealthy lifestyles.

Given the fact that Leukoaraiosis occurs frequently in patients with Filum Disease, at our centre, in patients who have a brain MRI with ischemic foci in the white matter, we apply the Filum System® diagnostic protocol to detect a possible Filum Disease. When an abnormal traction of the Filum terminale in a Filum Disease diagnosis is confirmed, we proceed to the sectioning of the Filum Terminale (SFT) by means of a minimally invasive exclusive technique. In several cases we observed a reduced leukoaraiosis after the SFT, which further supports the hypothesis that the abnormal traction of the nervous system could be a cause.