Home » All you need to know about chiari, syringomyelia and scoliosis » Arnold-Chiari I Syndrome

The Arnold-Chiari Syndrome Type I consists in the herniation of the lower part of the brain – the cerebellar tonsils – and of the lower part of the cerebellum through the foramen magnum towards the spinal canal, without other associated spinal cord malformations. For some, the descent of the cerebellar tonsils must be greater than 5 mm, for others 3 mm, for some it can be 0 mm or the tonsils can be impacted with a compatible clinical picture. 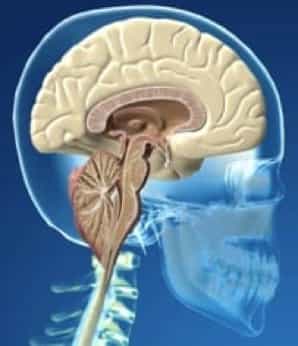 Figure 1.- Diagram showing the tonsillar descent and the consequent increase in the supracerebellar space in the Arnold-Chiari syndrome, given that the entire cerebellum moves toward the spinal canal. 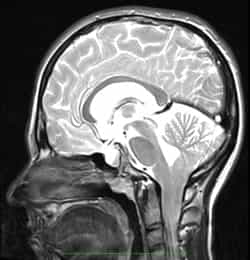 Type I. Descended cerebellar tonsils with no other malformation of the Nervous System (NS).

Type II. Descended cerebellar tonsils with a neurospinal malformation that tethers the spinal cord to the spinal canal.

Type “0”. At present, the existence of cases with signs and symptoms germane to the Arnold-Chiari Syndrome Type I, but without cerebellar tonsil descent, is being discussed.

Type “1.5”. The Arnold-Chiari Syndrome 1.5, with a descent of the cerebellar tonsils and brain stem herniation into the foramen magnum, has been described recently.

The Cord Traction Theory according to the Filum System®:

Dr. Miguel B. Royo-Salvador’s theory considers the descent of the cerebellar tonsils in an Arnold-Chiari Syndrome Type I, as a result of abnormal traction of the spinal cord, due to an anomalous and excessively tense Filum Terminale ligament (not detectable on imaging).

Figure 2.- Magnetic Resonance (RM) images of a female patient at the age of 8 months (left) and 20 months (right). The emergence of a cerebellar tonsil descent from one image to the next can be observed. Huang P. “Acquired” Chiari I malformation. J. Neurosurg 1994. This indicates the existence of an acquired factor that besides the genetic and hereditary component.

Risk factors in the Arnold-Chiari Syndrome Type I

The most influential risk factors for the development of the Arnold-Chiari Syndrome Type I are the following:

Complications in the Arnold-Chiari Syndrome Type I

Treatment of the Arnold-Chiari Syndrome Type I

The conventionally accepted treatment for Arnold Chiari I Syndrome is neurosurgical.

Currently, the craniectomy or suboccipital decompression is the standard treatment performed in most centers worldwide for this diagnosis, with or without syringomyelia. The indication is usually especially for severely symptomatic cases, as it causes more morbidity and mortality than the natural evolution of the condition itself.

Since 1993, however, with the publication of Dr Royo-Salvador’s doctoral thesis, which links the caudal traction of the entire nervous system due to the filum terminale to being the cause of cerebellar tonsil ectopia – among other diseases -, a new treatment has been designed. It is in this case etiological (cause-related) since the caudal cord traction force responsible for the pathological mechanism is eliminated by surgically sectioning the filum terminale.

Our technique for the sectioning of the Filum terminale (SFT) is minimally invasive and it usually indicated as soon as possible in all cases, from mildly to severely symptomatic, as its risks are minimal, much lower than those of the condition itself, and it also stops the condition’s progression.

Minimally invasive Sectioning of the Filum Terminale according to the Filum System®:

1. Eliminates the cause of Arnold-Chiari I and several associated conditions.

2. Eliminates the compression in the foramen magnum, and therewith the risk of sudden death.

3. The mortality rate involved in its application is 0% and there are no sequelae in more than 1500 cases that underwent surgery with the Filum System® method.

4. The surgical time with the minimally invasive technique is of 45 minutes. Few hours of hospitalisation. Local anaesthesia. Short post-operative period without limitations.

5. Improves the symptoms and stops the evolution of the descent of the cerebellar tonsils through the foramen magnum.

6. Prevents hydrocephalus that could ensue because of the impact of the cerebellar tonsils.

7. Improves the blood circulation throughout the Nervous System and hence the cognitive faculties that can be affected by the cord traction.

1. Minimal injury in the sacrum region, with the possible complications of a hematoma or infection of the surgical wound.

2. The improvement of spasticity is sometimes wrongly interpreted as a lessening of strength.

3. The improvement of altered tactile and pain reception sensitivity can wrongly be perceived as an inconvenience.

4. As the blood flow to the brain increases, so does brain activity and mood swings can be observed in the early post-operative period.

1. Eliminates the risk of sudden death.

1. It does not eliminate the cause.

2. The mortality rate ranges from 0.7 to 12% with a greater surgical risk than the condition’s sudden death rate.

4. It improves the patient’s condition little and for a limited amount of time (estimated in an average of 10 years).

6. Post-operative intracerebral haemorrhage, from the surgical site, epidural or intraparenchymal bleeding, that can cause a neurological deficit or increase the pre-existing one, in 0.1 to 5%.

7. Infarction – oedema, variable depending on the process and situation, up to 5%.

8. Superficial deep or cerebral infection from 0.1 to 6.8%, with a formation of a cerebral abscess, aseptic-septic meningitis.

9. Hemodynamic alterations due to the manipulation of the brain stem injuries.

14. Tetraparesis (loss of strength in all four extremities) due to the surgical position; incidental. 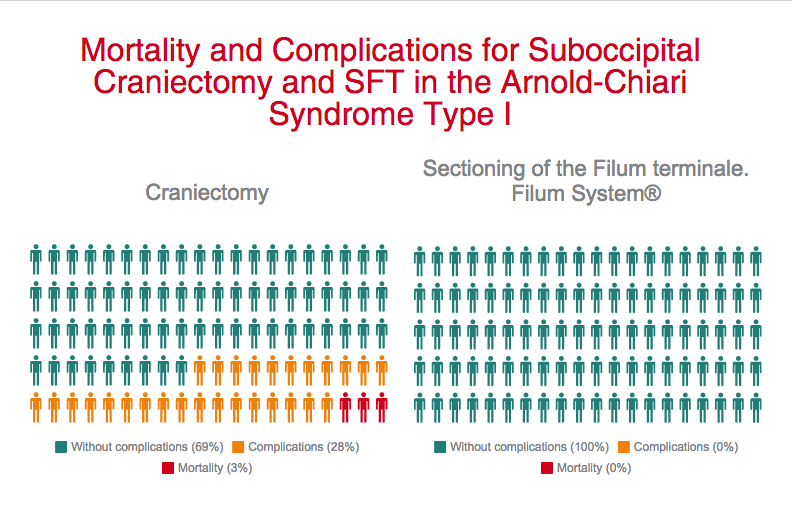 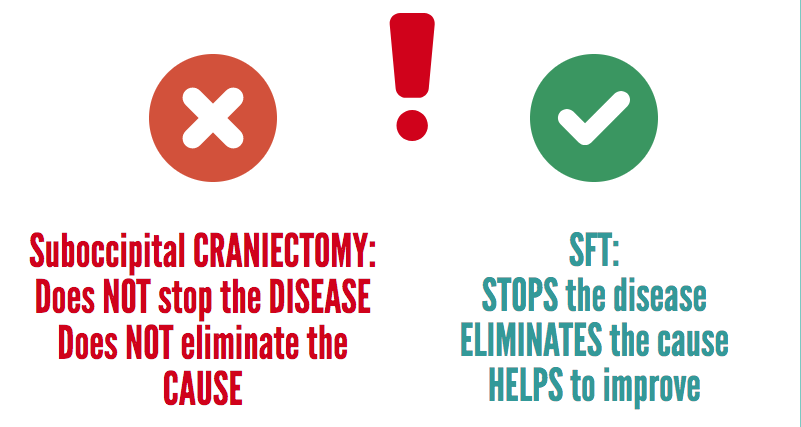 We deem the decompression surgery contraindicated as its complication and mortality rates exceed those of the natural course of the Arnold-Chiari Syndrome Type I.

Sectioning of the Filum terminale: Outcomes

More than 1500 Arnold-Chiari I patients, with or without idiopathic Syringomyelia and/or idiopathic Scoliosis, have already undergone surgery according to the Filum System® method.

The purpose of the surgical procedure is to stop the evolution of the disease and to prevent the ectopia and the injuries from increasing further. Nevertheless, in some cases remarkable improvements of the clinical status have been achieved, even including an ascent of the cerebellar tonsils. 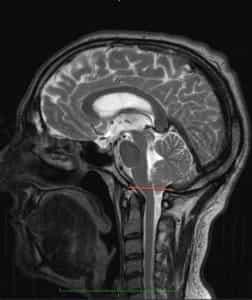 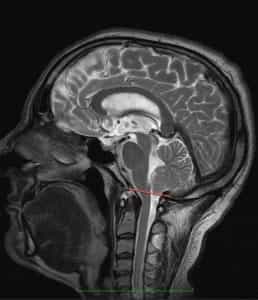 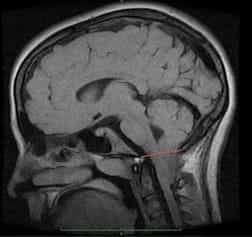 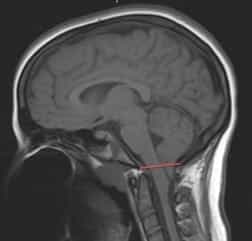 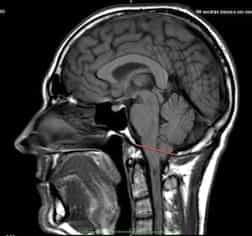 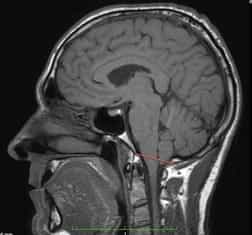 Described by: the anatomy surgeon John Cleland (1835-1925) from Perthshire, Scotland, in 1883. He described the elongation of the cerebellar vermis, the descent of the cerebellum and fourth ventricle in a child with hydrocephalus, encephalocele, spina bifida and myeloschisis. In 1891 and 1896 Hans Chiari contributed new cases and their classification. In 1894 Julius Arnold contributed by spreading the information.

Named by: Schwalbe and Gredig, in 1907, as “malformation of Arnold-Chiari”. The current terminology is “Arnold-Chiari Syndrome” (ACHS) International Statistical Classification of Diseases and Related Health Problems, 10th Revision (c) Geneva, WHO, 1992. (Q07.0, ICD-10).

Incidence: One case per one thousand live births, other authors point out just under one per cent of the population. In both cases the numbers are bound to very restrictive current criteria, with a descent of the cerebellar tonsils of more than 3 or 5 mm.

Dr. Royo-Salvador, with his research and doctoral thesis (1992), proved the theory that considers several diseases of unknown cause (Arnold-Chiari Syndrome Type I, idiopathic Syringomyelia, idiopathic Scoliosis, platybasia, basilar invagination, odontoid retroflexion, brain stem kinking, and others) as part of a new disease concept (the Filum Disease) and that they share a common cause (spinal cord and entire nervous system traction).

The traction force of the entire nervous system in the Filum Disease occurs in all human embryos, hence they all suffer its consequences to a greater or lesser extent, and the consequences manifest in many different ways and intensities.

Other diseases, such as herniated discs, some cerebral vascular insufficiency syndromes, facet joint and Baastrup syndromes, fibromyalgia, chronic fatigue, nocturnal enuresis, urinary incontinence and pronounced paraparesis, are related, due to their cause, to the Filum Disease.
A health method, the Filum System®, has been designed to specify the diagnosis, provide guidance for the treatment and follow-up of: the Filum System®.